Every time I have Hank green up, I only let him get something from the fridge from the quick meals. Poor Hank doesn’t know how to cook and hasn’t used his stove yet. Saves money this way, and today he autonomously selected a peanut butter and jelly sandwich. See? He has simple tastes.

Wednesday already, I can mark-up the products 25%. I also found that sims were congregating near the cash register and table with the tv and boom box, so I did a bit of a store renovation. I know, just day 3 and I am already moving things around. I also purchased 2 more windows for more light in the store. Moved the cash register and bought a chair and rug for Hank. I also purchased another outdoor sign to get more customers. Hank’s store now has the same number of advertising signs as Hallie’s store. First sale of the day was Moira Fyres who purchases The Wavescatter $300. Then sales are everywhere, Krishna Gupta, a new customer, purchased a Goldibox Gaming Console $498. Look out the window at the lovebirds! Hank you need to get some blinds!

Then this happens. Oh my gosh! Nancy Landgraab insulted Hank’s wardrobe. Nancy, your husband has this exact same shirt!

Then Marcus Flex purchases a Wabbit Tablet $625, followed by Geoffrey Landgraab with The Slablet $1,250. I think Geoffrey felt bad about his wife’s comment. 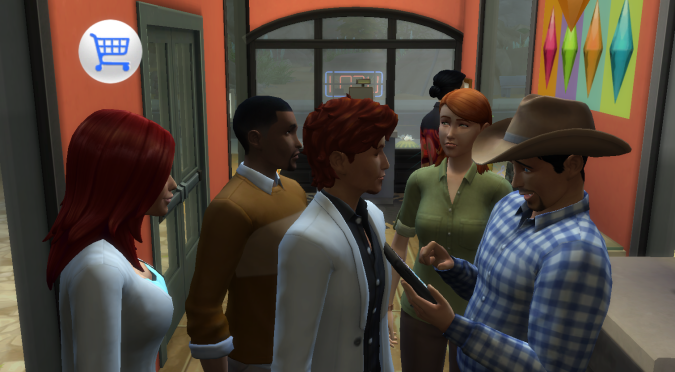 All of a sudden, everyone is buying and wanting to be rung up. Hank is so busy, he doesn’t have time to restock, and he has to pee! I hope he doesn’t have an accident! Katrina Caliente buys the Penguin television $343 and Advaith Parikh buys a Wavescatter $300. 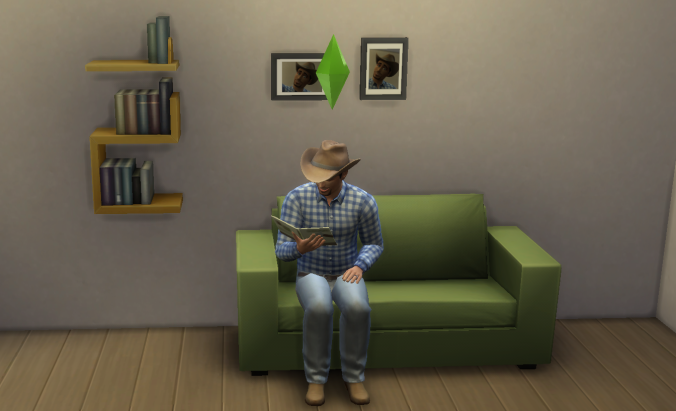 Hank sitting in his living room skilling on handiness skill. I looked at what skills they wanted for sales staff and it looks like charisma, handiness and fitness skills?

Hank is celebrating after hours on the purchase of his new double door. I spring the news on Hallie that she has to be open 13 hours today. She just woke up and is sitting on her couch in her pjs eating cheese crackers. She is not happy and autonomously shouts “forbidden words” at me! Well, sorry, Hank stayed open that long. I promise we will change the hours next week.

Her fun level is down and she is complaining that she has no computer, no tv, nothing! Another interaction you can do with the mannequins to get your fun up is “dance with mannequin”, so I send her off to do that. This seems to put her in a playful mood. I just hope she won’t be a grump puss all day today! Sheesh! Today, she dressed the mannequins in some party outfits with the playful pose. Hallie designed these herself. Yes, really she did! She just wonders if she’ll ever be able to get a day off to go and party. She literally spends all her time at the retail store. Oh look! Anne Hooker is trying on her new outfit, which she buys $218. Mortimer Goth came in a bit sad today, so Hallie went over and tried to cheer him up. “Have you ever heard of retail therapy, Mortimer? Buy something and make yourself happier.”

Mortimer seemed to perk right up after Hallie spoke with him, and I heard him say something about being rich and famous, so why not splurge? Sounded good to me! Mortimer headed right over to the male mannequin and tried on the outfit. Hallie also designed this outfit herself. Anne, who was standing right beside him, told him he looked so young and stylish.

Look at these women flocking around him. I think I heard Jazmin call him a stud muffin! Of course after that comment, Mortimer, ummm…Morti as he calls himself now…bought the outfit $218. That retail therapy really worked for him! Finally I have some customers sitting down on the chairs I placed in the store! But not too long…keep shopping sims.

Hallie is almost finished ringing up the children’s dresser $562 for Derrick Huerta and Lily Feng comes in. Lily gives Hallie such a look! Hallie is not going to lose that sale today and I keep an eye on Lily in case she wants to buy something. But all is forgiven about yesterday as Hallie rushes over to ring up Lily’s sale. Lily buys a Wall-Mounted Coat Rack with Shelf $200. Lily seems more impatient than other shoppers.

Our last 2 sales of the day. Mortimer Goth must have told Geoffrey Landgraab about the “rad” outfit that Hallie had for sale, so Geoffrey bought one, too! Mila Munch is back with her magic card and buys the Lucky Man Folded Laundry $118. 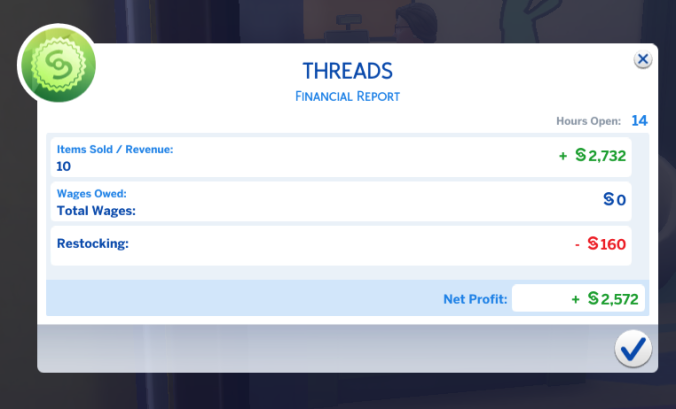 I have Hallie stock tonight versus tomorrow morning as there are only 2 items to stock.

Hallie treats herself to a garden salad and learns that knives are sharp. Heck, she has no cooking skills. Poor Hallie.

As I said at the beginning of this chapter, I was trying to keep the store hours the same between the two stores. When I was playing Hallie’s game, I had checked the store hours and they were at 13 and Hallie was just ringing up Mila’s purchase and then I went back to close and it had changed to 14 hours. But, even if I had calculated Hallie’s sales by 13 hours, Hank was still well above Hallie today. I wish there was a way you could set the store hours so that they would automatically open and close when you scheduled it.

Poor Hank being scorned by Nancy Landgraab for his outfit, but don’t worry, a trip to his sister’s store may be in his future.

Is Retail Therapy for real? Yes! Read about it HERE in a Psychology Today article.