It was Day 2 and Rusty had a restless night. He had found some old newspapers to sleep on, but the hard ground was rather uncomfortable, and he woke up well before dawn with a sore back. He decided to have a look in the pile at the back of his lot and found some planks which he used to build a kind of lean-to shack. He had also found a rusting cot and some used blankets. This would certainly be better than sleeping on the ground.

And, from all the pictures that Rusty had taken of his pets, he decided to put some up on his wall. They made the place look almost homey.

He had also gathered up some rocks and made a simple firepit, which would be great for cooking and keeping warm. Nights could be a bit chilly near the coast. With some scraps of wood and a few nails, he had also fashioned a camp chair.

Rusty was pretty proud of his accomplishment. This was the beginning of his house…his home, actually. Rusty felt like this was the start of a good day.

Of course no sooner had he set-up his new bed than Shredder decided to scratch the already worn blankets. Shredder, don’t scratch my bed! Shredder was indeed a mischief maker.

Outside, Duke was pretty interested in that tub that Rusty had made yesterday. In fact, Rusty was starting to think that Duke had a bit of an obsession about it. Maybe Duke liked the woodsy smell.

Meanwhile, out on the lawn, Thunder and Scotty were having a feast…ummm…of poop! Yes, even though their bowls were filled with kibble, they decided to munch on some poop. Rusty had to go over there and discourage those behaviors. The only good news was that Duke had learned to pee outside.

[Author’s note: When I got this notice, I thought this was funny because their whole lot is outside, but I guess it means that Duke didn’t pee in the shelter area.] 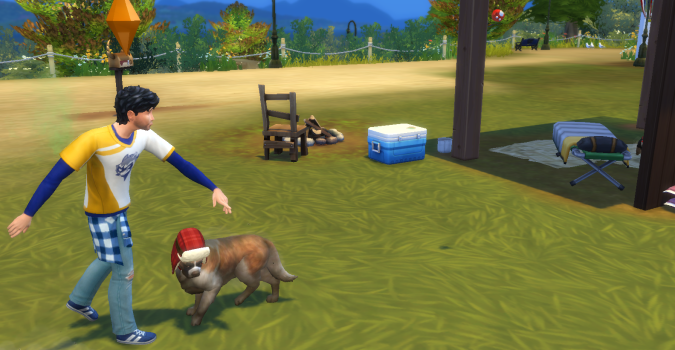 Rusty tried to take his mind off of all the pet mis-behaviors today and sent them hunting. Well, all except Aspen. Rusty hated to admit it, but Aspen was not a very good hunter. From all the dogs, Aspen usually brought in the least gifts. Oh sure, he would still send Aspen out to hunt, but Rusty had thought of something else. Aspen really liked to be around Rusty, so Rusty decided to put Aspen’s skills to better use and would try to train Aspen and get his training skills up. So far, it looked like Aspen was a natural at the “Go Fetch” training.

Looking around the lot, Rusty kept seeing lots of piles of hair, and he thought they were from either Scotty or Shredder. He remembered that Scotty was quite a hairy dog and figured they were from him. Rusty gave Scotty a nice brushing and will try to brush Scotty everyday. With the dogs coming and going throughout the day from hunting and leaving their finds in various places, Rusty really wanted to head out and try fishing again.

Rusty had discovered another fishing spot in a cove and hoped his luck would be better than yesterday. But after a few hours, he still hadn’t caught anything, so decided to head back to the lot. Plus, he really needed a bath. He was starting to smell like the dogs. So, Rusty thought this would be a great time to get cleaned up. A nice bath in his new rustic tub should do the trick. After boiling some sea water on the fire and filling the tub, he felt like there was nothing better than taking a bath in the great outdoors! Rusty almost lost track of time and it took 1 – 1/2 sim hours to get fully clean. By the time Rusty walked around and collected all the finds, the sun was setting. Rusty couldn’t believe that the day was almost done. He headed over to the cliff to glimpse a better view.

Rusty stayed there awhile and watched the sun set in the sky. What a beautiful sunset. It took his breath away. But, it was time to go back to the lot. He whistled for all his pack to return…

…including the very dirty Fifi who had been sprayed by a skunk!

After feeding the dogs and having some yogurt for dinner, all the dogs joined him around the campfire. Well, all except two….

It seems that Thunder has a fear of the firepit and Maxie, who is a bit jumpy, also is spooked by the firepit. Rusty goes over to calm them both down. Rusty is learning new things about his “wolf pack” each day.

It had been a big day, and Rusty decided to head to bed. Ahh…luxury in his new cot as he snuggled under the covers and drifted off to sleep. I guess all the pack had the same idea, and in no time, the only sound that you could hear was the sweet sound of snores coming from the shelter.

Rusty made a bit of progress today and built a lean-to shack worth $4,253 simoleons. This took almost all of Rusty’s simoleons and he had to sell most of his photos to buy some walls.

Rusty found out some interesting factoids about his pack. Duke has an obsession over the rustic tub, and both Maxie and Thunder are afraid of the firepit. And kudos to Duke for learning to pee outside. Rusty made a good friend with Aspen, and all of Rusty’s lectures paid off, because Aspen has learned not to Drink From Puddles. Rusty just has to be companions with one pet to complete Level 2 (Friend of the Animals) Friend of the Animals Aspiration. Rusty will definitely do that tomorrow.

A rather weird thing keeps happening as I am getting notices that dogs are hungry, even though there are several pet food bowls that are full. Perhaps they are hungry when they are away from the lot off hunting, so maybe that is why I am getting the notices.

The pack did some hunting, but I didn’t keep track of who collected what. Unique items found were a rare fossilized alien skull worth $250 simoleons, a large space rock worth $200 simoleons, and give your dog a bone, worth $5 simoleons. Most of the finds seem to be pet toys, worth a mere $5 simoleons.

Shredder, the raccoon, is the best feather gatherer ever and Rusty only needs 2 more feathers to complete the collection and assemble the bird sculpture.

As far as Rusty collecting, he is still having no luck fishing, but did find a treasure map worth $80 simoleons. Rusty has been so busy with the dogs, he hasn’t had much time to do anything. He really does have to get collecting or he will never make enough simoleons to build the $50,000 simoleon house he has to build. Plus, as per the rules of the challenge, Rusty is on short lifespan. $50,000 simoleons seems a long way off and I just hope that Rusty doesn’t fail the challenge. He has to come up with a new strategy tomorrow.

Thanks to BlissBeaumont for the Homeless Joe’s Paradise build. Original build was $7,220 simoleons and I renovated it on another lot and basically took everything out, so it was just an unfurnished lean-to shack and then saved it. The new build with only the lean-to shack cost $415 simoleons.